This album was recorded during Marx Brothers week on Minneapolis television. We had as much fun recording this record as they must have had making those movies. Most of the songs on this album are from, or reflect, the times when those movies were made. 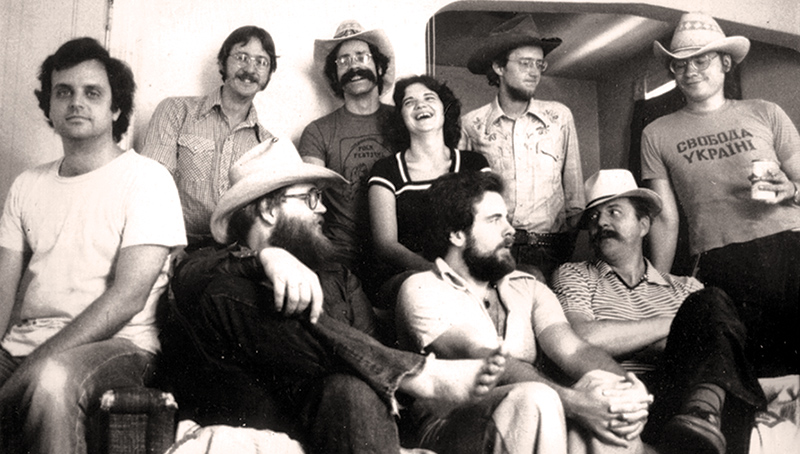 Old Fashioned Love We learned Old Fashioned Love from the singing of a friend of ours, Eric Peltoniemi. It was originally from a musical but Western Swing got ahold of it with Bob Wills, recording on September 24, 1935. Dave sings lead with backup vocals by Sean and Becky. Sean plays the guitar break.

Blues for Dixie Another one of our favorite Bob Wills tunes. This one was first recorded on November 10, 1947. Sean sings this one and Dave plays the guitar lead.

Drought Year A home-made song about the great drought of 1976. Dave sings the lead with harmony by Sean and Becky. Sean plays the guitar break and fills.

Hillbilly Swing This song was recorded in 1938 by Jimmie Revard and his Oklahoma Playboys. nobody seems to be willing to take credit for writing this one, even on the original 78. Sean does the singing with a chorus by the Bisketts. Sean plays the first guitar break, Dave the second.

Jingle in My Jeans So many people think that musicians don’t know the first thing about investing their money. It is time to dispell that myth. We know where our money goes. Every drop. Sean sings and fingerpicks the first lead and Dave plays Ted Bogan style rhythm and flatpicks the second lead.

The Old Campaigns This song is really about political and labor unrest in the 1930s. It applies equally well to the sixties. We sing it with hope for future campaigns. Dave sings lead and Sean adds the harmony. Dave plays the short break, Sean plays the guitar fills.

When You Go It really is true, and can be verified by piles of extensive research, that what the world really needed before this song came along was one more lost love song. Now, at long last, here it is. Sean sings the lead with a harmony by Dave and Peter. Sean does the fine fingerpicking and Dave does the flatpicking.

Beaumont Rag is one of the hottest of the Texas contest tunes. First learned from Bill Hinkley, about five years ago. Sean plays the swing-style rhythm, Dave picks the lead.

Fan It This one was recorded by Bill Boyd’s Cowboy Ramblers on October 27, 1936. A version was recorded by Bob Wills just a little over a year earlier. Written by Jimmie Jaxon, a black entertainer, this song was a standard of most of the Western Swing groups. Sean sings this one with a harmony by Dave and a chorus by the Fanettes. Dave plays the first guitar break, Sean the last.

That Palomino Pal o’ Mine was recorded on December 1st, 1947 by the Sons of the Pioneers with Roy Rogers singing the lead. Sean sings Roy’s part and Dave, Peter and Becky fill in the rest of the chorus. Dave plays lead guitar.

How I Spent My Summer Vacation by Sean Blackburn

Well on the way home from school me and my friend and I “Dakota” Dave, were talking to our friends about recording an album of our favorite songs and two of them turned out to be instrumentals anyway everybody said “gee that would be swell” let’s go over to Dave’s house because his mom will let you smoke and they don’t care if you drink beer but they got mad when we tried to get the parakeet drunk so then we went to a “studio” and played all the songs by microphones and stuff and you can tell where we were having fun but Dad said I shouldn’t leave in the part where somebody burped but it turned out okay then one day we went to the lake and I hooked my back pocket and pulled myself off the dock into a canoe and got three stitches but other than that it was okay.

Well, boys, I just heard the tape of your brand-new record and isn’t it a genuine beauty.

I have heard you play these songs in some of the rattiest spots on all of the wrong sides of town, and the songs always came through clean and simple despite the drunks and the dirt and the general dog-vomit tendencies in the air, and now they have come through on this recording, which may be the harder trip. Recording is sure a killer. You crawl into a studio and they wire you up and stick the business end into a Big Hemi mixer channeled and chopped and suddenly you are liable to forget what it was that made you play music in the first place. Well, it sounds to me like you had a good time in there.

Anyway, the songs survived it and the feeling comes through just as when you sang them first. And now they are released and free to beat it on out of here and live their own lives, to be fruitful and to fall among thieves and to go up to glory. So I am proud of you both and hope you won’t mind that I think of you as artists. It doesn’t mean you have to play in higher-class establishments. Just that you should take good care of yourselves. …Garrison Keillor