Bill Hinkley is a Minneapolis-based multi-instrumentalist who can most often be heard with his wife and partner, Judy Larson doing all kinds of wonderful music in nearly every conceivable style.

Cam Waters lives in Red Wing, Minnesota where he repairs guitars, sings and writes songs. He can sometimes be seen on the road with me.

I went to college with Eric Peltoniemi back in the late Sixties, and we’ve stayed in touch and played together occasionally ever since. A veteran of writing music for theater, Eric now has his own group, Trova.

L aughter runs like a babbling brook through the rich landscape Dakota Dave Hull paints with deft and supple strokes. Through the textures of his alternately tender and ferocious attack, his fertile talent, his exquisite taste, shines this rippling, laughing stream of musical jokes, references, and homages to the great guitar stylists who have shaped his playing, the odd graceful phrase or note or passage that makes one sit up and smile, even laugh, in pure joy and appreciation and delight.

Not that he squanders his vast talent “goofing” on his instrument, not at all. He is serious, even earnest, about the rightness of what he plays, interprets, or writes. It’s just that unlike so many other talented technicians, there is an imp within Dave Hull that always expresses itself on the fretboard; a witty, intelligent yet respectful imp who frolics in his music, an imp Dakota Dave neither fights nor lets take control, but simply absorbs into the heart of his style.

It’s what makes Dakota Dave’s playing such great listening; so charming, so winning, so unforgettable.

-Ranger Doug–Riders In The Sky 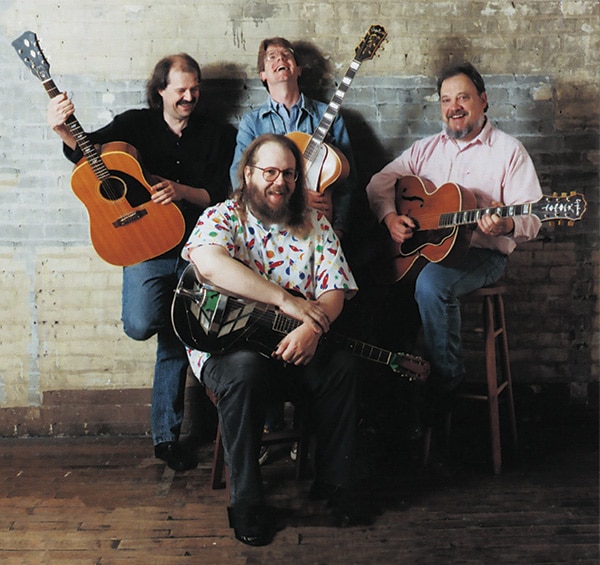 Panhandle Rag, a Western Swing number written by Leon McAuliffe is something I’ve been playing for years. I probably learned this classic from a Bob Wills recording. Bill plays rhythm. Mystery Waltz is one of those tunes that just sort of happen. After two years of trying to decide what to call it, I finally decided it would always be a mystery. I play both parts. I really owe the inspiration for Reunion Rag to Dave Van Ronk who was doing this sort of thing when I was a teenager in Fargo (I like to remind him of that fact).

Milton Brown and his Musical Brownies recorded When You’re Smiling back in the Thirties and Leo Raley’s mandolin break on that version changed my life. Offered here as an archtop duet with Cam.

Too Good to Be True is a love song. Turned out that way, too. Which makes a perfect lead-in for the next tune, What’s the Use. Again, Cam plays the solid rhythm part. Hymn is one of those numbers that come unbidden in the middle of the night.

I like fiddle tunes a lot, although I seem to have gotten away from them lately. June Apple takes me back to the early Seventies in Minneapolis with Pop, Bob, Charlie, Peter, Maureen, Sean and all the rest. Here’s to ya.

I wrote Iowa Girl Waltz in a motel room in Madison, Wisconsin. I was down, lonely and all by myself. Ask Cam. He was there. Eric plays the beautiful second guitar part.

I’ll Never Be the Same is a standard that I learned from the playing of Joe Venuti while Bill learned the Eddie Lang version. Bill plays the second break and I get the rest.

Leaving Buffalo is about a rainy morning in May when I was doing just that.

Once in a while true inspiration really happens. Cam and I wrote No Such Thing (as Too Much Garlic) after a truly memorable dinner one night. He plays the first and last breaks while I contribute the one in the middle.

Margaret Skadland and Margaret Hull were a couple of remarkable women. When I play Margaret’s Waltz I always think of them. Thanks to Bill Cagley for teaching it to me and Cam for playing rhythm.

Itasca Rag is named for Lake Itasca in northern Minnesota, the source of the Mississippi River.

From rivers to trains—Chattanooga Choo Choo will always be one of my favorite train songs, especially when I get to play it with Cam.

I believe that Hard Times is Stephen Foster’s greatest work.

Teague’s Deal was written in honor of my pal Curtis Teague, guitar dealer extraordinaire. If you knew him you’d know how well it fits him. Cam plays the second guitar part on this as well as the last tune, Antelope Rag. This is the number that started me down the road to Ragtime ruin. An entire summer at the four-track went into this one. I sure do like the result, though, and I hope you do, too.