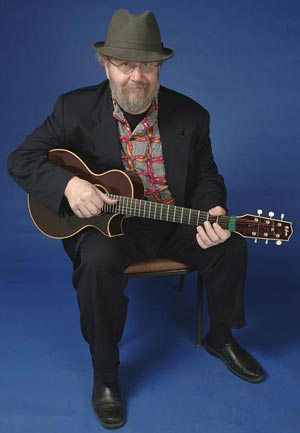 “In a burg lousy with casually brilliant acoustic guitarists, Dakota Dave Hull still manages to stand out, and not just because of his colorful shirts. A masterful flat-picker and increasingly out-of-the-closet fingerstyle player, Hull is not only a magician on the strings, his distinctive arrangements of the vintage material he loves manage to be wry, spry, maybe even fly. Most importantly, his interpretations always find a fresh angle on well-traveled material. This gig will mark the release of Hull's new CD, The Loyalty Waltz (Arabica), almost certainly not a tribute to John Ashcroft. Among a handful of fine originals, including the wistful Dave Ray tribute 'Snaker's Gone', are sparkling renditions of pop tunes from the early days of the last century, old folk and blues nuggets, bits of jazz, and a jaunty, especially evocative Stephen Foster medley.” -Rick Mason, City Pages, Minneapolis, MN