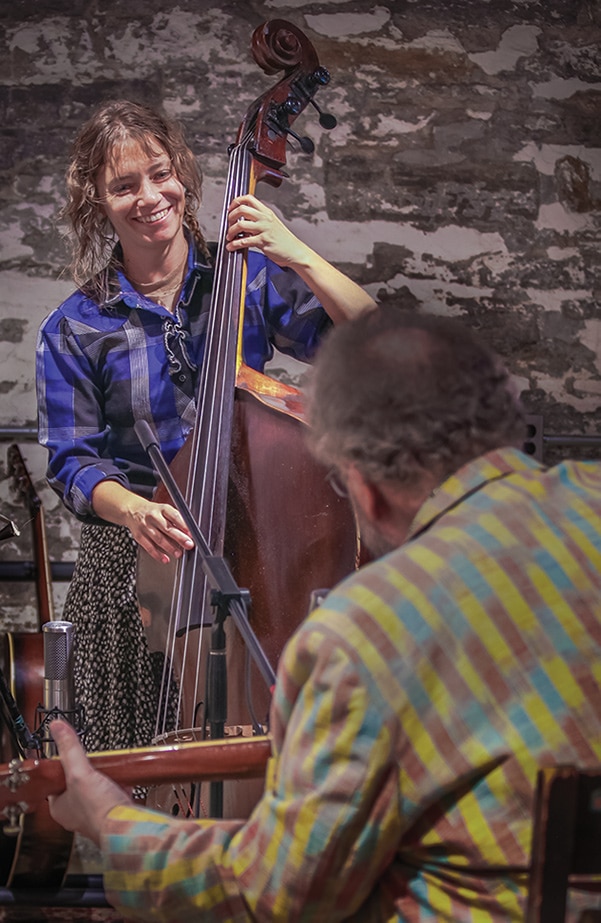 Back in the late 1950s and early ‘60s, the days of the folk scare, a lot of records featured the services of an upright bass player. (Actually, both the instrument and the player needed to be upright—no easy feat in those days.) I remember being blown away by Russ Savakus’ bass break on Ian and Sylvia’s Early Morning Rain from the 1965 album of the same name. Simple and perfect. Something about the tone of the instrument has always appealed to me. Lately I’ve been been thinking more and more that it would be fun to record some of my tunes and arrangements as duets with a bassist. Fortunately I didn’t have to look far to find the right musician. Folks who’ve heard my Under the North Star CDs will recognize Liz Draper as the anchor on the group stuff. In these parts it seems she’s always busy doing great music with great folks. Undoubtedly the most in-demand bassist in town. I asked if she was up for another CD with me and she agreed and that was that.

A number of these tunes harken back to those folk scare days, too. Hang Me Oh Hang Me, Buddy Bolden’s Blues, and Tell Old Bill were all part of Dave Van Ronk’s repertoire at one time or another. I’ve known the three tunes that make up the trilogy that closes the CD since I was a teenager. I’m guessing that I first heard My Name is John Johanna on a recording by the New Lost City Ramblers.

Folk music led me to Western swing and Western swing led me to traditional jazz. It’s all part of the same continuum in my view. Fats Waller, one of the great stride pianists, singers, arrangers and stylists, oozed creativity. A couple years ago I acquired his complete recordings. I worked up I’m Gonna Sit Right Down and Write Myself a Letter and Lulu’s Back in Town after listening to nothing but Fats on a pair of long road trips. Those who know me understand that my cover of the Ink Spots’ Java Jive needs no explanation.

Rounding out the current offering are four originals. One waltz, one jazzy number, and two four-part rags.

I hope you’ll sit down with a cup of great coffee and enjoy this CD. After that, I hope you’ll have another cup, and listen again.

For the guitarists who want to know, four tunes, (tracks 3, 4, 7, and 12) are in drop D tuning and the rest are in standard. I used a number of great instruments on this album: (a) A Grand Concert Johann Brentrup guitar with oak back and sides, (b) a National Reso-Phonic Style 1, (c) a circa 1890 Fairbanks Electric guitar-banjo with a new neck by Hoffman Guitars, (d) the New Era Prairie State Big Boy, (e) my 1935 Gibson Jumbo, and two guitars from Dale Fairbanks: (f) an L-00 and (g) a Roy Smeck Radio Grande. Liz’s bass is an unlabeled 5/8 instrument, most likely of German origin, from the late 19th or early 20th century. Microphone setup was pretty simple. A Groove Tubes model 1a on the bass, a Groove Tubes Velo 8T on the guitar, both through a UA 2-610 preamp.

I’ve known Dakota Dave Hull for nearly 50 years, and he’s always been a True Believer, as devoted to the community of folk music as he is to his own music. He was flashier in our wilder days (to look at us is to know we never had “salad days”), because young bucks have to prove themselves. He even wore the moniker “Fargo Flash,” a predictor of Dave’s droll gift for the self-mocking boast. Today his playing wears the grace of the master, so sublimely melodic it can shroud his world-class chops.

What has never changed is the unbridled joy he takes in folk music and the people who love it. There’s a way he peeks over his glasses at the best bits, grinning like a kid, making sure you’re having as much fun as he is. I dare anyone to catch his show and remain in a bad mood.

But don’t let that fool you. Dave is a towering figure in his field, considered a peer by the finest folk musicians this country has produced, including Doc Watson, Norman Blake, Utah Phillips, Paul Geremia, and Dave Van Ronk, who called him “one of the best guitarists in the world.”

In his 20th recording, Another Cup, Dave returns to the music that first made him a True Believer, classics from the innocent early days of the folk revival, before folk became a business and our innocence became something else. Sprinkled with a few simpatico originals, the set is given even more ‘60s purity by Liz Draper’s stand-up bass, echoing the supple lines of Russ Savakus and Bill Lee.

I love Dave for all the gracious ways he’s changed, but even more for the lovely ways he has not. He’s still folk’s Happy Warrior, still a True Believer.