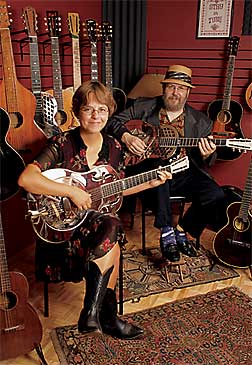 Dakota Dave Hull and Kari Larson practically define the art of the guitar duet. And when they’re not both playing guitar—when,for instance, Dave’s on ukulele and Kari’s on mandolin—they’re creating and defining a whole other kind of sound. Whatever the stringed instruments they happen to be holding at any given moment, the music that flows out of them is of the kind only the hands of masters could have released. Or as Flatpicking Guitar Magazine puts it, “They enter each musical room, decorate it beautifully, and then they live in it, bringing the music to life from the inside.”

Hull and Larson’s musical mansion has many rooms, reflecting their encyclopedic knowledge—and command—of folk, pop, world, jazz, and classical musics. Here you’ll find Appalachian tunes, ragtime, Irish airs, Western swing, Brazilian melodies, Tin Pan Alley, and original compositions drawing on these influences and more. All of this is played on a variety of vintage instruments, including acoustic arch-top guitars (of which they are among the few remaining practitioners). They also play National resophonic instruments and, of course, flat-top guitars.

Most of all, though, Hull and Larson—for all their amazing technical expertise—are believers in great melodies and in music that touches listeners, sometimes to make them smile, at other times to move them in the ways that art of beauty and power moves us. Their instruments play more than notes; they become voices. At the conclusion of one concert, a listener expressed her appreciation in these words: “Thanks for singing your guitars for us.”

Kari comes out of the San Francisco Bay-area acoustic music scene. She has also performed in rockabilly bands, Jewish and Italian groups, and Baroque ensembles.

She studied classical guitar at the San Francisco Conservatory of Music. After moving to Minnesota in 1994 to study instrument building and repair in Red Wing, she was soon making an impact on the Twin Cities acoustic scene. In late 1995 she and Dakota Dave began performing as a duo. Dave says, “I have never felt a closer affinity to another musician. Kari is a brilliant and creative stylist who never ceases to amaze me.”

Hull & Larson performed together for over six years.