People who’ve known me for any length of time know that I take my coffee seriously. Very seriously.

In 1980, while on the road with Sean Blackburn, my friend Fr. Bill Teska introduced me to Don Lohr who, at the time, lived outside of Tucson, Arizona. Don, disgusted with the quality of coffee offered in those days, had figured out how to roast his own. Through trial and error he came up with the idea of using an old uncoated long-handled omelet pan over the stove top to replicate the actions of a drum roaster. I was fortunate to be able to spend some time with Don learning his philosophy and methods.

There were a lot of variables in that method—you don’t really have control of the temperature and airflow, for example—but with practice I learned how to roast a mighty good batch of coffee; for the next 15 years or so I roasted my own. I managed to source green beans from a variety of suppliers and I learned a lot about coffee growing regions, processing and taste. I usually enjoyed single-origin coffees and I would change coffees with each new roast. It was never boring.

In the late 1980s a new coffee culture started to spread across the landscape. Many cities that had never had a decent coffee shop, much less a roaster, were now sporting at least one. The Twin Cities was no different: Ed Dunn came in and opened his first Dunn Brothers Coffee shop in St. Paul. (A few years ago he sold his company to a franchiser, but it’s still pretty good. They continue to roast every day in almost all of their locations.) Ed, like Don, was gracious and forthcoming with his coffee knowledge. I started purchasing my coffee already roasted more and more of the time. Eventually I stopped roasting at home almost altogether.

I was interested in various brewing methods, too. Don Lohr had very good luck with a stovetop espresso machine; the one he used was called an Atomic. They were made in Italy and looked very space age. I believe a company in Australia or New Zealand is manufacturing them now. There was a similar machine, the Vesuviana, also made in Italy. I still have one of those. Drip methods, plunger pots, vacuum pots from the 1920s and ’30s, flip-drip pots, Turkish ibriks—I messed with nearly everything except percolators, because percolators suck.

I kept, and occasionally still use most of the coffee rigs I’ve picked up through the years. It’s amazing what a person can collect given enough time. We all have our favorite methods and they’re all a little different. With freshly roasted high-quality coffee and a little care it’s pretty easy to make a delicious cup of coffee. A good grinder is absolutely necessary, too.

Speaking of grinders, I started, like most folks, with a cheap little electric blade grinder. Later I got a hand grinder or two, and I tried a variety of electric burr grinders as well. Generally the consumer grinders wear out, usually about two days after the warranty expires. This was true with grinders from Krups, Braun, Cuisinart and a few others I tried through the years. What’s the matter with the mill?

I’ve never stopped learning about coffee. The so-called Third Wave has brought in even more changes, most of them good. The pour-over coffee offered at the Café Bach in Tokyo is the best I’ve ever had in a shop (although I’ve had as good). I lurched over there from the hotel next door several mornings during my stays in Japan and believe me, I paid attention to what they were doing every step of the way and learned what I could. Especially as I enjoyed my second cup of the morning.

These days I use a Rancilio Rocky doserless grinder, an upgraded Rancilio Silvia espresso machine, a vintage KitchenAid grinder, and the Hario pour-over method. Gram scales and timers are important, too, for consistent results. The Rocky grinder made an incredible difference in my coffee life, a difference I could taste. It was expensive, but the price per year is already less that what I paid for the grinders that burned out, and the quality is so much better. The Hario method is also a big improvement over the Melita-style drip coffee I made previously. Yum. 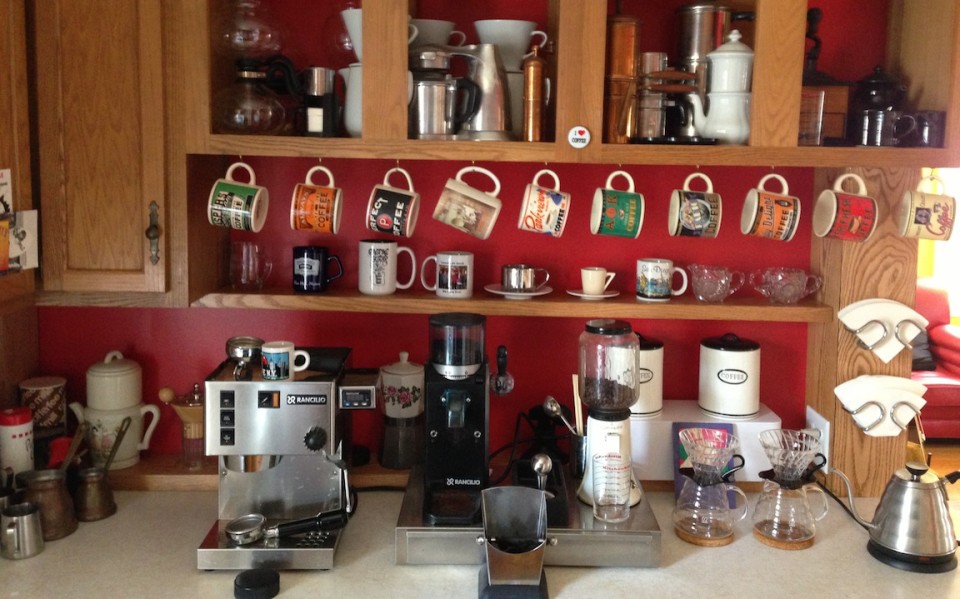 Everybody needs a hobby!